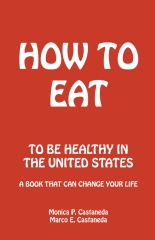 How to Eat to Be Healthy in the United States

We are the Castanedas. Marco and Moni met in Ecuador at a health food restaurant. One week after they started dating, Marco enrolled Moni in cooking classes at the restaurant. He says it was the best investment of his life!

When Moni first arrived in the US she did not know, for example, that high fructose corn syrup is made in a laboratory to concentrate the fructose levels (fructose is a type of sugar) and that it is not natural. Another thing that took Moni by surprise was the enormous amounts of sugar in bottled juice (one cup of bottled juice may have more sugar than your body can handle in a whole day). Back in South America, Moni drank juices often, but they were home-made with fresh fruit, and contained much less sugar.

Marco was blessed with a super high metabolism, but when he reached his mid thirties, it started to slow down and Marco found himself, for the first time in his life, having to watch what he ate, lest he gain weight.

When the babies arrived, Moni still hadn’t gotten a handle on her weight, and making sure the foods we were eating as a family were healthy become even more paramount. We changed some things. Before babies we didn’t eat most everything organic, but now we do. We do this not just because we want to avoid pesticides, herbicides and GMOs (genetically modified foods), but also because organic food tends to be more nutrient dense. It also tastes better!

We have summed up our experiences and findings in the book How to Eat to Be Healthy in the United States.